Not All Secondary Containment Is Created Equal: Pros & Cons of Concrete Containment

Concrete containment is a fairly common permanent solution used by utility companies to prevent a transformer oil leak from polluting the ground, and offers some obvious benefits when used for secondary containment. It is strong and durable, and requires low maintenance. It has a long life expectancy and is fire-resistant. 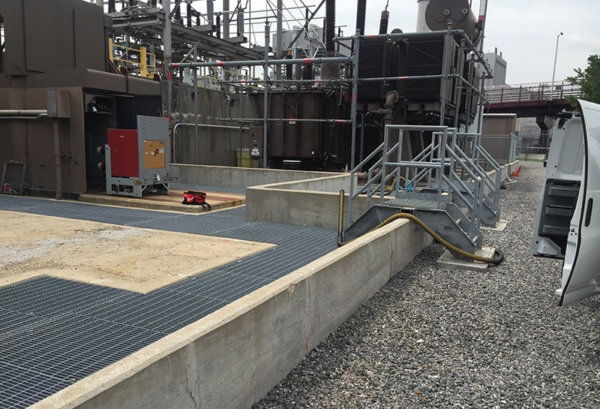 Modern man lives in a concrete jungle – it’s all around us, the core ingredient to so many fundamental facets of our infrastructures, from our roadways to high-rise buildings to sports arenas to hydroelectric power plants that keep the lights of Las Vegas shining around the clock. But concrete isn’t a new concept – it’s been around for quite a while. It was widely used during the Roman Empire. One of the most notable and historical concrete structures is the Colosseum in Rome. The word itself reflects its history, stemming from the Latin word “concretus,” which meant “compact or condensed”.

Concrete containment is a fairly common permanent solution used by utility companies to prevent a transformer oil leak from polluting the ground, and offers some obvious benefits when used for secondary containment. It is strong and durable, and requires low maintenance. It has a long life expectancy and is fire-resistant.

However, there are also some cons that come with using concrete for oil containment. Anyone who has walked on a sidewalk before can point out an obvious disadvantage – concrete cracks, especially in areas where the temperature may fluctuate. Temperature variations can cause hardened concrete to contract or expand, which can lead to cracking, especially where connections provide restraint and no provision has been made for to accommodate these conditions. Weathering is also an issue. Carbonation components found in rain and moisture can cause concrete to ebb and pit over time. This combination of weathering and cracking can lead to spalling, in which chips or fragments will break off of the concrete. Left untreated and exposed to the elements, spalling can cause extensive structural damage. When choosing concrete for secondary containment, engineers must refer to ACI-06 code requirements, which are concrete design and construction standards developed specifically for environmental concrete structures. 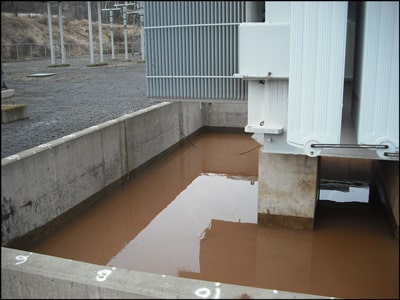 Concrete containment runs the risk of creating a “swimming pool” of contaminated water that needs to be pumped regularly. If the concrete is cracked, as it was in this case, the water can pollute the ground 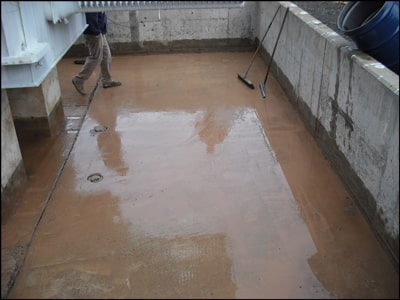 Before the geomembrane liner system can be installed, the oily water must be removed 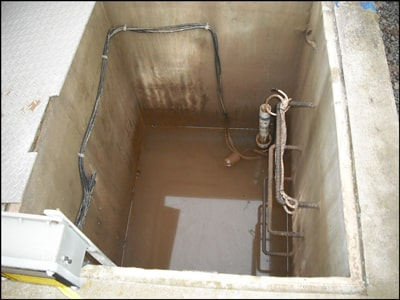 With the cracking, weathering and squalling, leaks are sometimes inevitable. Have no fear – we offer a solution to keep your concrete containment leak free. A major investor-owned utility contacted us to help with a substation that didn’t have an ideal setup – the site had a concrete containment vault around the transformer that drained into an external sump with an oil detecting pump. They got in trouble by the state and federal regulators because oil was leaching through the cracks in the concrete, and they were pumping the oil-contaminated water onto the ground, where it was washed into a stream below the substation. 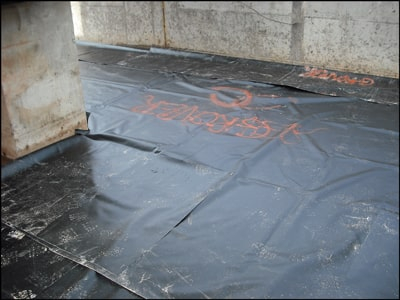 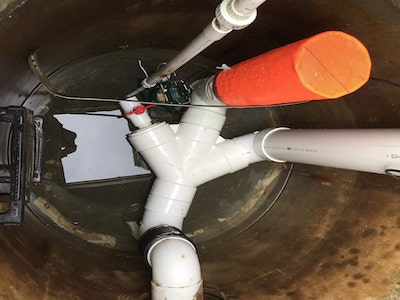 The state and federal regulators required the utility to present a detailed plan of action outlining their clean up and remediation measures to restore the environment, as well as their actions to correct the situation and prevent a future reoccurrence. We recommended installing a Geomembrane Liner System, as well as a VIPOR System to replace the faulty pump in the sump.

Within two weeks, the Geomembrane Liner System was custom built to the specifications of the existing concrete containment; the installation took less than one day. This solution has been written into the utility’s standards as a solution to issues with concrete containment.

If your concrete secondary containment could use an update or needs to be retrofitted to meet SPCC requirements, we can help. Contact us today for a quote.